Workflow: Next Approver is my VP

Many times in approval workflows, the first approval needs to go to the employee’s manager, and then the next approval is supposed to go to the VP of that department.  The VP isn’t necessarily going to be your manager’s manager, though.  In SharePoint Designer 2010 workflows, information about users can be obtained within the workflow, which lets you look up, say, job title information.  This means that we can look to see if a manager has the text “VP” in their job title, to see if that’s the next person to route the item to for approval.

Your user profiles do need to have accurate information, in this case especially in the Manager field and the Job Title field.  Also, in this example I’m assuming that there won’t be any more than 4 levels between the workflow initiator and the VP of that department.  You can see the pattern that’s used and just add more levels if you need to.

As a very simple example, we have an item that routes like this:

After the VP’s name has been obtained, you can pretty much do whatever you need to do in the workflow, such as send them an email or assign a task.

First, the following is the list of variables to create in the workflow: 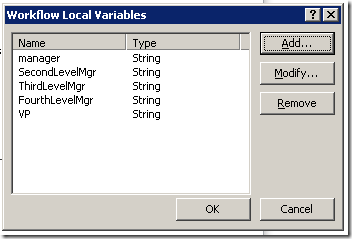 Then, these are the high level steps to go through:

IF User Profiles:Job Title (of the manager) contains VP

Now that you see the gist of how the workflow goes, I’ll get into some details about a couple of the actions used.

On each line that starts with IF, these are the steps to lookup that manager’s job title:

Okay, so that’s the most complicated part of the workflow, the job title lookup.  All the other steps are pretty much just as they’re written in the Workflow Steps text above.  I do like to use the “log to history” action a lot in my workflows, which helps with troubleshooting.

Here’s an entire screenshot of the workflow in SharePoint Designer 2010.  Click to enlarge:

You’ll notice that I did put a bunch of logging in there.  Again, this workflow doesn’t DO anything in its current state, except obtain the VP’s login name and store it as a variable.  For this to be useful, it would just be a part of a bigger workflow.  You can send an email to the VP (the variable), or assign them a task, etc.

Read my Syllabus
Check out my live online and self-paced courses, starting at $50.