Trip to the Microsoft Lync 2010 Launch

Last month was Microsoft’s launch of a new product called Lync 2010, and I had the honor of being invited to the official product launch in New York City.  This was an amazing experience, and there were many interesting people to meet.

There are some very useful new features in Lync, such as Kinect integration with video, interactive white boarding, and integration with mobile devices.  The experience with mobile devices and phone systems is much more of a rich and highly integrated system now.  For more information about the product, there are a plethora of blogs out there, and you can always follow #Lync on Twitter.

So, what was the launch event all about? My co-worker Jennifer Mason and I were both invited, so we met up as soon as we got to the city, and had lunch with our good friend Dux, who was also invited to the event.  That evening was the event’s reception, where we enjoyed great music and food, and had a great chat with Kirk Koenigsbauer about Lync and all of the excitement around it. 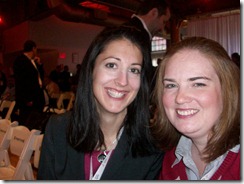 Here is Chris Capossela doing the keynote, and the (virtual) guest speaker was Bill Gates!!

The launch consisted of a very informative keynote, and several very elaborate demos of the product.  One demonstration showed how a group of people around a conference table can have a virtual meeting with another remote party, and all of them can share a white-boarding session.  The COOL demo was of the new Kinect (for Xbox 360) being integrated with Lync!  So, basically you’re sitting in your living room and the Kinect has a web cam built in and it lets you attend a Lync virtual meeting from there!

Here is a picture of us after a great round-table discussion with Kirk after the launch was over:

Oh, and then we got to go on stage and try out all of the demos ourselves, like the Kinect.

In summary, this was a great experience!  Thanks so much to Microsoft for inviting me, it was an honor.